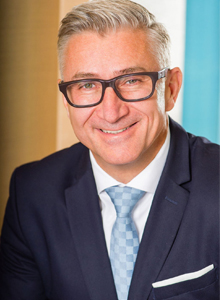 Franck Arnold has thirty years in the hospitality industry and brings a wealth of experience from working for well-known luxury brands and independent hotels in North America and Europe. He joined The Savoy in September 2020 with a clear vision to navigate the hotel through the global pandemic, remaining true to its heritage as the home of luxurious innovation in the UK.

Franck began his journey into hospitality attending the Hotel School of Strasbourg (France), earning a Hotel Management and Culinary Arts degree, followed by a Masters in Hotel Administration from IMHI Cornell-ESSEC (Paris) and his M.B.A from Henley Management College (UK).

Franck’s entrance to the industry began with InterContinental Hotel’s Corporate Management Training Program. His roles included Assistant Restaurant Manager, Rooms Division Manager Trainee, Assistant Director of Food and Beverage and Executive Assistant Manager. During his thirteen years with IHG, these leadership positions had Franck moving from Paris, to London, to Athens, to Brussels and on to Madrid, all prior to moving to North America where he served as Hotel Manager at the Barclay Intercontinental in New York. Franck then on went to join The Four Seasons Chicago as Hotel Manager before taking the role of Managing Director of the exquisite Jefferson hotel in Washington, DC. He then moved his family back across the Atlantic to Edinburgh Scotland where he was General Manager of The Balmoral, a five-star iconic Rocco Forte Hotel for five years. During his time at The Balmoral Franck became a Master Innholder and was given the Freedom of The City of London.

In 2016, Franck took on the role of General Manager at The Ritz-Carlton, Toronto, where he was awarded the Forbes Five-Star every year from 2016, and received the humanitarian award from the Hotel Association of Canada in 2018.

When he is not working, Franck is an avid marathoner, cyclist, squash and golf player. He still enjoys cooking for his family and friends. He has moved to the UK with his wife Salima, daughter Céleste and two sons Arthur and César, together with Schnauzer puppy Jules.